Getac Technology Corporation, a leading producer of rugged computing hardware and integrated solutions, today announced the release of its next-generation K120 Windows® 10 tablet. A landmark in handheld, fully rugged computers, the K120 gives field force and manufacturing workers in a myriad of industries the state-of-the-art performance, unsurpassed multitasking capacity, diverse connectivity options, and ability to go anywhere and do anything under any conditions, typically offered, if at all, only in bulky full-size ruggedized laptops.

Getac engineers leapfrogged into the future by upgrading or enhancing the technology driving most of the K120 major systems to provide mobile professionals in such critical industries as homeland security, law enforcement, construction, power generation, communications, manufacturing, transportation logistics, and oil and gas exploration with better, faster, more versatile tools with which to perform their onsite jobs and streamline their offsite interactions. 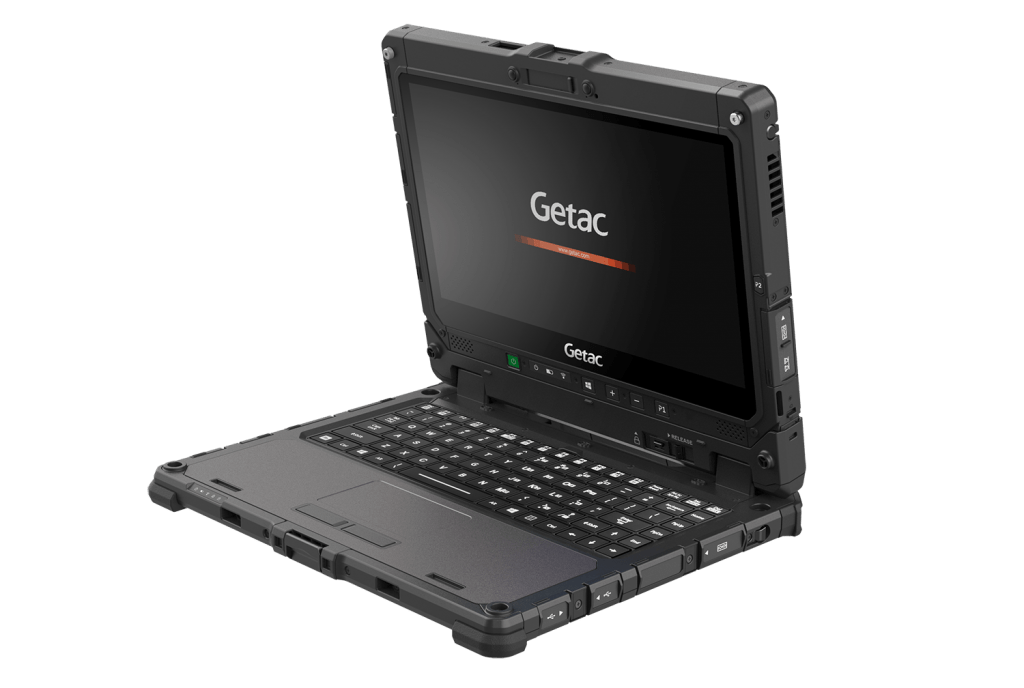 One small-but-significant front display-surface upgrade is the addition of backlighting to the five programmable buttons located on the bezel below the screen, which have received back-lighting, a boon to anyone working in dimly lit conditions.

One invaluable attribute the K120 shares with the previous generation and all other Getac computers is participation in the acclaimed Getac Select® program, which combines pre-configured rugged devices, software, accessories, and professional services into total industry-specific solutions.

New best-in-class technologies and a few of the ways in which they positively impact end-users in targeted vertical industries include:

Upgrading from 8th Generation CPUs gives mobile workers across the board access to 11th Gen’s transformative new core and graphics architectures, Al-assisted acceleration and leading edge connectivity, coupled with double the previous generation standard RAM, results in blazing fast computations and the ability to multitask like never before.

The use of standard PCIe technology with up to 1GB/s per lane in place of 0.6GB/ maximum speed SATA SSDs significantly reduces read/write wait times for all types of applications.

A Better Way To View Everything

Like the more powerful CPUs in which it is embedded, Iris® Xe graphics offer some benefit to every K120 user. Where they really shine, however, is in vehicles where police officers or ambulance attendants are trying to follow intricate GPS maps through densely packed urban areas, on construction sites where three hardhats clustered around the K120’s large, daylight visible screen are pointing out details on an enlarged section of a blueprint and similar scenarios.

Integrating signals from the 24 Russian GLONASS satellites with the U.S. Defense Department’s 24 GPS and, in the K120, 4G LTE connectivity, enables positions to be fixed more quickly and accurately, especially in metro areas where tall buildings in congested areas can obscure line-of-sight view to some satellites.

Key beneficiaries of this technological breakthrough include first responders racing to disaster scenes requiring multiple units to arrive at separate but closely spaced locations and utility workers called to the scene of gas or water line blowouts and downed power lines.

Using a better compression/decompression codec, Bluetooth 5.2 enables larger amounts of information to be transmitted over lower bandwidth and at lower power. Great news for audiophiles hoping to someday be able to hear CD (or better) quality music from Bluetooth headphones and speakers, but not the big story here.

The hot ticket here is 5.2’s Enhanced Attribute protocol, which allows parallel transactions between Bluetooth devices to occur simultaneously. Think “cable guys” or phone company techs being able to access individual Bluetooth-enabled line-testing devices simultaneously instead of having one blocked while another is in progress.

How about them hurricanes

Like all Getac devices, the K120 is designed and built from the ground up to survive. New in the K120 is an increase in ingress protection rating from IP65 to IP66, a seemingly minor change that’s anything but. While an IP65 rating certifies a device as protected from water projected from a nozzle. IP66 means a device is secure against heavy seas or powerful jets of water.  Another significant K120 upgrade is receiving MIL-STD-810H certification in place of the 810G certification. The K120 retains its predecessor’s 6ft (1.8m) drop resistance, operating temperature range of -29°C to 63°C (-20°F to 145°F).

From a crew member checking instrument readings on the flat deck of a super tanker in stormy seas, to utility workers communicating oceanfront hurricane conditions to their “garages,” IP66 certification gives new meaning to the phrase “neither wind nor rain shall stay these couriers from their duly appointed rounds.”

In issuing the 810H certification specification, the Department of Defence significantly tightened up the procedures for passing most of the 29 tests required to achieve MIL-STD-810G approval. To date, the K120 is the only tablet in its class to meet these tough new standards thus providing both military customers and heavy-industry customers with the assurance they are getting the most battle-ready tablets on the market.

Ins, outs and just passing through

The big news here is the K120 inclusion of a 40Gbps Thunderbolt™ 4 port. Other upgrades include HDMI 1.4 to HDMI 2.0 support and making RF antenna pass-through for GPS, WLAN and WWAN standard rather than optional feature.

Efficient asset and workforce management are both key aspects of the utilities industry, but they can be challenging to achieve from the field without the right devices and applications. The K120’s Thunderbolt™ 4 technology makes all kinds of data collection and communication fast and efficient, while an optional RS-232 port supports legacy equipment, helping to extend lifecycles and streamline field operations.

Getac’s Virtual Global Positioning System (VGPS) is a software solution that replicates GPS data to multiple virtual COM ports, allowing up to five different software applications to run simultaneously on a Getac device. Doing so helps extend the life of legacy applications that require COM port interfaces to run in parallel, such as AVL, CAD, or eCitation. VGPS can be seamlessly integrated with any GPS-equipped Getac device.

Heavy industry automation scenarios frequently rely on expensive, hard-to-modify and virtually impossible to upgrade legacy applications to control computerized machining tools and robotic devices. With VGPS, these users can avoid the disruptions, downtime and expense of replacing perfectly functioning software simply because their hardware will no longer support it.

With the introduction of the K120, the global shutter has been upsized to better capture symbols at higher resolutions for more stable decoding, motion tolerance has been increased to easily and quickly capture codes on fast moving objects, a wider viewing angle is employed to scan wide codes at closer distances and typical read ranges have been increased to enable longer distance code captures.

The G2’s optional keyboard dock replaces the legacy VGA port with a DisplayPort 1.2a supporting up to 4K images at 60 frames per second and an HDMI 1.4 port with an HDMI 2.0 port. A larger capacitive touchpad provides more real estate for navigation and supports Windows PTP (Precision Touchpad) functionality for increased navigation speeds and productivity.

“Basically, the new generation K120 makes formerly impossible tablet computing tasks possible,” said Joe Martin, Director of Getac USA’s Product Solutions Division. “The K120 can direct the right person to the right place at the right time with greater precision than ever before in a field-force tablet. It can enable on-the-go scanning of barcodes sufficiently dark or soiled to require workflow slowdowns or stoppages with other tablets barcode readers, it can display, and even create, diagrams and blueprints with unparalleled precision, it can run five com applications simultaneously and more.”

“Despite its thin and light design it is as, or more, unstoppable than rugged laptops weighing three to five pounds. It will work flawlessly in blazing heat, bitterly cold blizzards and tropical rainstorms. And, in the unlikely event something does stop it, it’s covered by the best protection plan in the business, Getac’s three-year bumper-to-bumper warranty with added accidental damage coverage.”

The next-generation Getac K120 will be available in July of 2021. For more information, please visit: https://www.getac.com/intl/products/tablets/k120/